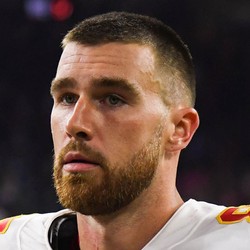 Remember last week how I talked about Kelce and that he should have cost closer to $8,000 on a four-game slate? Well, maybe that number should have been closer to $10,000 with the way Kelce played. He was a slate-breaker with his 10-catch, 134-yard, three-touchdown performance that netted 44.4 DraftKings points. Seriously, he outscored Patrick Mahomes. DraftKings has raised his price because of that, but it's still too low for a tight end on a two-game slate. Not only is Kelce matchup-proof, but his matchup against the Titans is above average to begin with. There were six different tight ends who tallied at least 73 yards against the Titans this year, and Kelce was one of them when he tallied 7/75/1 on seven targets in their Week 10 meeting. It's not just yardage, either, as they allowed five different tight ends to finish as top-five options against them, including a nine-catch, 130-yard game to Austin Hooper. Was it volume-based? Nope, they allowed the seventh-most fantasy points per target to the position. After allowing Tyreek Hill a 11/157/1 line in the first meeting, the Titans have more to worry about than just Kelce. Even on a bad day, the Ravens tight ends combined for 8/92/1 against them last week. Kelce is kind of like Derrick Henry on this slate; you kind of have to play him, though Kittle gives you a bit more wiggle room when it comes to salary.

Travis Kelce (knee) was a limited participant in Wednesday's practice.

There is no concern over his status for Sunday's AFC Championship game against the Titans. Kelce erupted for 10 catches, 134 yards, and three touchdowns this past weekend and should be all systems go this Sunday afternoon.

Deposit $10 at a DFS partner site you have NOT played at and get a FREE 6 Month HOF Subscription!
Claim Offer
Who Should I Start?
Most Accurate Experts
for Travis Kelce
Consensus Rankings
View all Flex Rankings