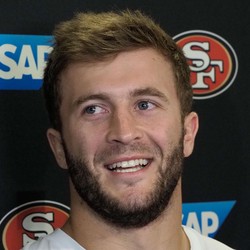 Trent Taylor (foot) is having some issues with the soft tissue around his Jones fracture, but the 49ers expect him to return from injured reserve after eight weeks.

Taylor will look to come back in the mix at some point in November. Marquise Goodwin , Deebo Samuel , Richie James and Dante Pettis will head the 49ers passing catching options for the foreseeable future.