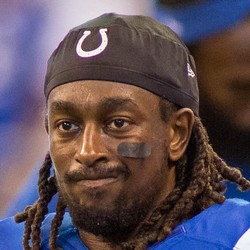 He's entering the final year of his contract with the Colts and is likely to lead them in targets. Some may be concerned about last year, but Jacoby Brissett wasn't the guy to get him the ball. Philip Rivers, on the other hand, he can sling it. Going back to Hilton with Andrew Luck in the Frank Reich offense, he finished with WR2-type numbers in 64.3 percent of his games. The addition of Michael Pittman and Jonathan Taylor may bring down his touchdown upside, but he should remain a consistent WR3, at worst.

T.Y. Hilton and Colts talks of contract extension died down during pandemic

WR T.Y. Hilton told the media recently that he wants to be a “Colt for life,” but also that talks of an extension have died down due to the coronavirus pandemic.

Hilton and the Colts seem to have a mutual interest of getting a long-term deal done. The eight-year veteran is under contract only through this season and is set to become an unrestricted free agent. Neither side wants to let that happen and Hilton has made it very clear he intends to retire after his next long-term extension is up with the Colts. For his career, Hilton has caught 552 balls for 8,598 yards, and 45 touchdowns. He’ll be expected to be the leader in the wide receiver room for youngsters Parris Campbell, Zach Pascal, and Michael Pittman Jr. Hilton and the rest of the crew will be catching passes this year from Philip Rivers, which should in theory help with their production. Think of Hilton as Rivers’ new “Keenan Allen.” He’s currently ranked #24 in FantasyPros consensus WR rankings, but could easily find himself as a top-15 WR should he stay healthy and build a chemistry early on with his new QB.

Deposit $10 at a DFS partner site you have NOT played at and get a FREE 6 Month HOF Subscription!
Claim Offer
Who Should I Draft?
Most Accurate Experts
for T.Y. Hilton
Consensus Rankings
View All Rankings
Do Not Sell
Are you looking to contact Customer Support about a subscription or account related question?
Yes
No, I'm a California resident looking for the California Consumer Privacy Act form