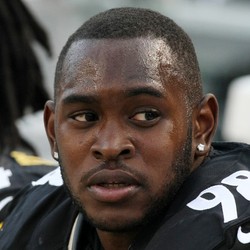 It was a dominant performance by Williams who now has a sack in back-to-back weeks. The interception came on Carolina’s second possession when quarterback Cam Newton, chased by linebacker T.J. Watt, retreated into his own end zone before chucking up a desperation ball that landed in the arms of Williams. He proceeded to return it 17 yards for the score.

Deposit $10 at a DFS partner site you have NOT played at and get a FREE 6 Month HOF Subscription!
Claim Offer
Who Should I Draft?
Most Accurate Experts
for Vince Williams
Consensus Rankings
View All Rankings
Do Not Sell
Are you looking to contact Customer Support about a subscription or account related question?
Yes
No, I'm a California resident looking for the California Consumer Privacy Act form