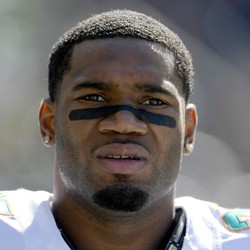 Xavien Howard was arrested Sunday and held overnight at the Broward County Jail for one count of domestic battery.

According to police reports, Howard allegedly pushed his fiancée after a heated argument over a undisclosed purse purchase. The Dolphins have released statement that the team is aware of the situation, but are still gathering more information on the incident. Howard could be at risk of a suspension under the NFL’s domestic violence policy. He has been on the injured reserve since October due to knee surgery.