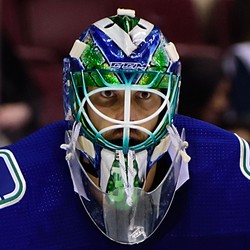 Anders Nilsson stopped just 11 of 15 shots before being pulled in Ottawa's 5-2 loss to the Vancouver Canucks on Tuesday. This was the Swedish netminder's third straight loss and it dips his record for the season to 7-7-1.

The month of November began magnificently for Nilsson, as he went through a scorching stretch that saw him win six of seven starts. Unfortunately, he lost his final two starts of the month and has now dragged his recent poor play into his first start of December. After seizing the majority of starts in the Ottawa net, Nilsson has conceded 11 goals in his past two games and now Craig Anderson is due to come off the injured reserve and start on Wednesday. Nilsson is probably going to have a 50/50 share of starts at best for the rest of the way unless he finds his solid form once again.

Anders Nilsson will receive the start in goal for Ottawa in Friday afternoon's clash against the Wild.

Nilsson has produced a solid stretch of play recently and has also taken on the lion's share of starts with Craig Anderson on the shelf (lower body). He's posted a 6-2-0 record in his last eight games and has allowed two goals or less in six games across that same span. His ratios for the season are up to a solid 2.58 GAA and .927 SV%, alongside a 7-5-1 record. Nilsson is a worthy fantasy start against a Minnesota team that sits 22nd in goals per-game this season (2.76), on top of the fact that they're turning to rookie Kaapo Kahkonen to make his second career start in goal.

Anders Nilsson turned away 35 of 38 shots on goal in Ottawa's 4-3 victory over Detroit on Tuesday night. Nilsson improved his record for the season to 6-4-1.

Nilsson has now strung together five wins in his last six starts and in the process has overtaken Craig Anderson for the majority of starts through 21 games (11-10). Plain and simple, Nilsson has been the better goaltender for the Senators this season. If he keeps up anything near the rate of play that he's had during his scorching November (5-1-0, .930 SV%, 2.33 GAA in six starts), he's a solid fantasy play. On the season, he's boasting a 2.79 GAA and a .924 save percentage, the sixth-best rate in the NHL.

Nilsson has been a great spark for the Senators of late, and the hot streak has earned him some more playing time over his counterpart in the crease, Craig Anderson (2-6-0). Statistically, this decision is a no brainer for Ottawa as Nilsson's 2.67 GAA and .930 SV% is leaps and bounds better than Anderson's 3.20 GAA and .897 SV%, so far. Obviously, the stat Ottawa cares about most is the win column, and Nilsson has certainly given them a better opportunity to win so far this season with his 4-3-1 record. He'll earn another start on Monday night at home against the Hurricanes, a team he helped defeat 4-1on Saturday.

Anders Nilsson's season debut was a rough one as he stopped just 31 of the 36 shots St. Louis fired in his direction on Thursday.

It's an unfortunate result, because Nilsson's teammates actually managed to provide some offensive support. But it still wasn't enough in a 6-4 loss. If you're in need of a spot start this season, you should look elsewhere.

Brendan Ballantyne39 weeks ago
Do Not Sell
Are you looking to contact Customer Support about a subscription or account related question?
Yes
No, I'm a California resident looking for the California Consumer Privacy Act form