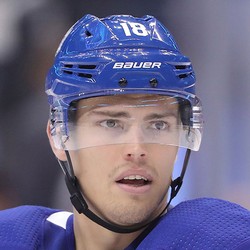 After a five game slide where he was absent from the scoresheet, Johnsson came up with his best offensive performance of the season. He's been demoted from the first to the second power-play unit since Sheldon Keefe took over, which has resulted in a slight dip in ice-time. But, Johnsson is still finding himself in a nice position by lining up with Auston Matthews and William Nylander. Johnsson has produced a decent total of 15 points (seven goals, eight assists) in 26 games so far this season, just shy of a 50-point pace.

Andreas Johnsson scored a power-play goal - his fifth goal of the season - and added a power-play assist in the Maple Leafs' 5-4 loss to Chicago on Sunday. He also had four shots on goal.

After taking four games off from putting the puck in the back of the net and two games without recording a point, Johnsson found the scoresheet with his third multi-point performance of the season. Johnsson may not be a household name like some other Maple Leafs, but he's still playing on the top power-play unit with them, and has been from day one of this season. He's a solid, low-key depth player in fantasy for that reason and is now up to 12 points (five on the power-play) across 19 games.

Andreas Johnsson scored his third goal of the season in Toronto's 5-2 loss to Montreal on Saturday night. He added five shots on goal and one hit.

Johnsson had gone five straight without finding the back of the net prior to Saturday night, so it was nice to see him shake the slump. It's been an average start to the season so far for Johnsson, but since his three-game pointless streak to start the season, he's recorded eight points (three goals, five assists) in the next 10 games. His ice-time has sat in the 16-17 minute range and he's got a spot on the top power-play unit, so expect Johnsson to keep chugging along with some useful production.

Andreas Johnsson recorded an assist, two shots on goal and a +1 rating across 18:33 of ice time in the Maple Leafs 3-2 loss to the Blues on Monday.

It's been a bit of a slow start for Johnsson to say the least, with only an assist to his name through four games. Given the cushy even-strength and power-play opportunity he's been given in the early going, you'd expect some more production out of the left winger. That being said, if the lines don't shuffle, you have to believe the points should be coming along very soon for Johnsson who has recorded 20-plus goals in each of his three North American pro seasons.

Andreas Johnsson found himself on the Maple Leafs top power-play unit during the morning skate prior to the season opener against Ottawa on October 2.

This is a huge boost to Johnsson's fantasy value, as he will reportedly be working alongside the highly skilled group of Auston Matthews, Mitch Marner, John Tavares and Morgan Rielly for prime PP minutes. Given that Johnsson is already set to play on the top line with Matthews and Williams Nylander, the 24-year-old is in line to best his 43 points from a season ago.

Brendan Ballantyne41 weeks ago
Do Not Sell
Are you looking to contact Customer Support about a subscription or account related question?
Yes
No, I'm a California resident looking for the California Consumer Privacy Act form