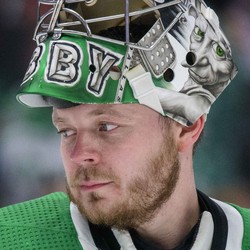 Anton Khudobin was pulled from the game after allowing four goals on 17 shots faced against the Minnesota Wild Saturday night.

Prior to Saturday's match against Minnesota, Khudobin had not surrendered more than a pair of goals in any of his previous four starts. He has been one of the most solid backup goalies this season but unfortunately, he had an off-night. His record will now drop to 11-7-1 with a 2.30 GAA and 0.927 SV%.

Anton Khudobin allowed two goals on 26 shots faced as the Stars would lose to the Sharks 2-1 in regulation Saturday.

While Khudobin played a pretty sound game, it still was not enough for the Stars to pull off a win. It is a disappointing loss, but Dallas needs to quickly rebound and begin preparing for a very important clash with a division foe in the Colorado Avalanche Tuesday night.

Anton Khudobin turned aside 30 of 31 shots faced as the Stars defeated the Kings 2-1 in regulation Wednesday.

Khudobin has been a great backup for starter Ben Bishop. The Stars have no qualms putting their second-string goalie in net, which a lot of teams cannot say. He now improves his record to 11-5-1 with a 2.13 GAA and 0.933 SV%.

Anton Khudobin stopped 22 out of 23 shots faced as the Stars defeated the Red Wings 4-1 Friday evening.

After allowing an early goal to Dylan Larkin in the first period, Khudobin settled in and did not allow another shot to go past him for the entirety of the game. He improves his record to 10-5-1 with a 2.20 GAA and 0.931 SV% for the season.

Anton Khudobin will get the nod for Friday's contest against the Detroit Red Wings.

Khudobin played very well the last time he was in between the pipes. He stopped 33 of 35 shots against the Arizona Coyotes on Sunday and earned his ninth win of the year. He has been a solid backup for starter Ben Bishop and will look to help the Stars keep pace with the Blues and Avalanche for the top spot in the Central Division out west.