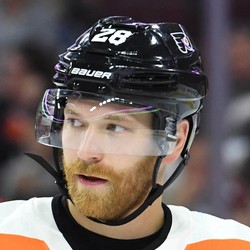 Claude Giroux grabbed two assists in a loss against the Kings on Thursday.

Giroux's two assists brought him up to 42 assists and 58 points on the season.

Claude Giroux scored with seven seconds remaining, bringing the Flyers within a goal, but it would be too late. The Capitals sealed the win four seconds later with an empty-netter.

Fantasy owners will gladly take the tally, which was Giroux's 14th of the season. It broke a six-game scoreless drought, dating back to Dec. 27. Giroux has been held off the scoresheet in five of the last six games. Don't let that discourage you at all from starting him. He should be locked in your lineup.

Claude Giroux assisted on a pair of third-period goals against the Hurricanes in a 5-3 loss.

He snapped a four-game pointless streak, but still has 46 points in 40 games. Giroux does have a chance at his second straight 100-point season, but he would have to go on a nice offensive run at some point. Even if he doesn't, Giroux should be one of your best fantasy players for the rest of the year.

Claude Giroux ripped a great shot past Pekka Rinne during Philadelphia's win over the Predators on Thursday.

It was Giroux's first goal in six games, but he is still playing well over a point-per-game pace. He has been very consistent and should continue to be relied on in fantasy lineups.

Giroux is up to 36 points in 27 games and is the clear offensive producer for the team. The captain is a must-have in fantasy leagues.