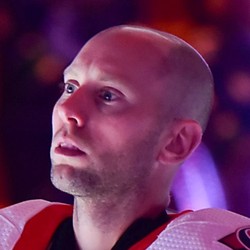 Craig Anderson has been activated off the injured reserve and will start against the Edmonton Oilers on Wednesday. It will be Anderson's first appearance since November 25th.

Anderson had been nursing a lower-body injury, but he'll return in the minimum amount of time in order to take the start on the second night of a back-to-back. Backup Anders Nilsson has struggled of late, so Anderson has the opportunity to seize some playing time. He will carry an underwhelming 4-8-0 record into the game, along with a 2.96 GAA and .904 SV%. On the bright side, Anderson had conceded two goals or less in three out of four starts prior to his injury.

Craig Anderson had four shots find the back of his net while stopping 28 in Ottawa's 4-1 loss to the New York Islanders on Tuesday. Anderson's record now sits at a lowly 2-6 on the season.

Anderson received little offensive support in this one but it probably wouldn't have mattered much anyway. The goaltender has now allowed nine goals combined between his last two starts and has lost four of his last five; he possesses a 3.20 GAA and .897 SV%. It probably doesn't need to be said, but...avoid him.

Craig Anderson stopped 22 of 26 shots in a 5-2 loss to the Arizona Coyotes on Saturday. His record dropped to 1-4 on the season.

After stopping 34 of 35 shots in his previous start, Anderson took another L and has now lost back-to-back games. There's going to be a lot of that this year. He currently has an .895 save percentage and 3.25 goals against average.

Craig Anderson got into the win column for the first time this season, turning away 19 of 21 shots and backstopping the Senators to a 4-2 win on Saturday.

The result itself was a shock, but maybe the most puzzling figure of the night was that the Lightning only managed to direct 21 shots on goal against this Ottawa team. Anderson isn't complaining though, as his record improves to 1-2. That being said, his ratios continue to be weak with a .882 save percentage and 3.71 goals against average.

Craig Anderson is projected to start in goal for Ottawa's season opener on October 2. The goaltender's first matchup comes on the road against Toronto.

Anderson appeared in 50 games in 2018-19 and posted a .903 save percentage with an ugly 3.51 goals against average. Given that the Senators are continuing with their youth-focused movement, the veteran will generally be a goaltender to avoid for fantasy purposes this season. Avoidance cannot be emphasized enough for his matchup against the high-flying Maple Leafs attack.

Brendan Ballantyne41 weeks ago
Do Not Sell
Are you looking to contact Customer Support about a subscription or account related question?
Yes
No, I'm a California resident looking for the California Consumer Privacy Act form