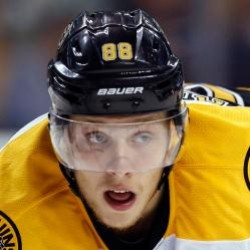 David Pastrnak scored a goal and added an assist in Boston's 3-2 victory against the Buffalo Sabres Sunday night.

David Pastrnak scored his 26th as the Bruins fell 3-2 to the Washington Capitals Wednesday.

The score snapped a four game goal-less streak for Pastrnak, who still maintains a five goal lead over Alex Ovechkin (21) for most goals in the NHL.

David Pastrnak scored his NHL-leading 24th goal 1:40 into overtime as the Boston Bruins rallied from a 2-0 deficit to defeat the New York Rangers 3-2 Friday.

Pastrnak also had an assist in the contest, bringing his season point total to 41. He was a consensus Top 10 fantasy pick heading into drafts, but few fantasy prognosticators expected a season like this.

Pastrnak's league-leading 23 goals are now five more than Edmonton's Connor McDavid, who sits in second place with 18. The hat trick elevates him to 39 points on the season, fourth most in the NHL. He now has five points in his last five games.