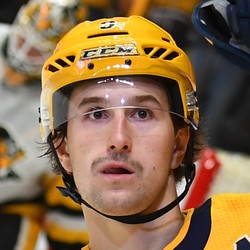 With 31 points in 37 games, Forsberg makes for a very solid fantasy start.

Forsberg tallied a goal and an assist in Nashville's 6-2 loss to Boston on Tuesday. He was also -1 and added two SOG.

Forsberg now has 15 goals and 15 assists in 36 games. He is a solid fantasy start, though his production can be inconsistent.

Forsberg picked up an assist to go along with one SOG and three HIT in 16:45 in Wednesday's 4-2 loss to the Stars.

Filip Forsberg scored a goal on four shots in Nashville''s 6-4 defeat of New Jersey on Saturday night. He was also +2 and picked up two PIM as well as two Hits in 20:07 in ice time.

Forsberg leads Nashville in goals with 11 and is third in points with 19. He is probably the best forward bet on the Predators for nightly production, though that is not saying much. It's hard to trust starting a guy who has only two points in his last five. He does at least provide a steady floor with 3.86 shots per game on the season.

Forsberg helped Calle Jarnkrok in the first period of the 3-0 victory over the Hurricanes.

With 18 points in twenty games (-3), Forsberg is a very reasonable play in fantasy.