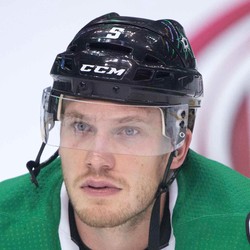 Oleksiak has produced three points in his last four games played. He still does not have any fantasy consideration as he only has 10 points and a minus-four rating through 63 contests this year.

Jamie Oleksiak scored his third goal of the year 16:27 into the third period to put an end to the shutout at 5-1.

The Stars did not do much in Friday's critical game against the Blues. Oleksiak's goal was inconsequential as they would lose 5-1 and fall to third in the Central division.

Jamie Oleksiak scored the eventual game-winning goal 11:38 into the third period Wednesday against the Arizona Coyotes. Dallas would hang on to win 3-2 by the end of the third.

This was only Oleksiak's second goal of the 2019-20 campaign, but it came in a huge fashion as the Stars remain tied with the Blues for the top spot in the Central Division. He also has a minus-three rating in 60 contests.

Jamie Oleksiak provided the lone helper on Joel Kiviranta's third period tally as the Stars seized a 2-1 lead over the Devils Saturday.

Oleksiak assisted the rookie forward in earning his first career NHL goal Saturday evening. He now has one goal, six helpers, and a minus-two rating himself through 51 contests this season.

Jamie Oleksiak tallied his first goal of the regular season 12:18 into the second period as he gave the Stars a 3-1 lead over the Nashville Predators.

Oleksiak has six points and an even plus/minus rating through 34 games this season.