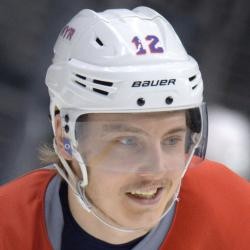 Jesper Fast earned the secondary assist on Kaapo Kakko's first goal scored on the night in a 4-2 win over the Dallas Stars Tuesday.

Jesper Fast scored 2:49 into the first period to give the Rangers a 1-0 lead over the Flyers Friday. Unfortunately, Philadelphia would score five unanswered goals to eventually claim a 5-2 victory.

There were rumors swirling around last week about whether or not the Rangers would decide to move on from Fast at the trade deadline. New York chose to hang on to him as they believe he is a good veteran presence to have around for the younger players to follow. He has 12 goals and 28 points in 63 games of action this year.

Jesper Fast buried the first and third goals for the Rangers as they defeated the San Jose Sharks 3-2 in regulation Saturday night.

Fast's two-goal outburst comes as a bit of a surprise as we have not seen a performance like that from him very often during his career. One would have to trace all the way back to Dec.29, 2018 for the last time Fast scored more than a goal in a single game. He has 11 markers and 27 points through 60 contests this year.

Jesper Fast buried a goal 9:48 into the second period to give the Rangers a 2-1 lead over the Hurricanes Friday night.

Fast has nine goals and 25 points in 59 games this year.

Fast now has eight goals and 24 points in 54 games this year.