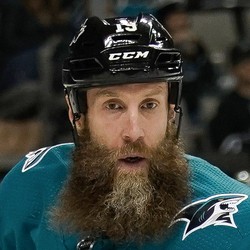 Joe Thornton scored two goals on four shots during the Sharks 3-2 loss to the Rangers.

The goals were just his fourth of the season and he also has 23 assists in 61 games played. The goals ended a 50-game goal drought on the road for Thornton.

This season in 54 games played, Thornton has two goals and 20 assists with a minus-12 rating. He does have three assists in his last three games, but has not scored a goal in his last eight games.

The 40 year-old Thornton has decided to return to the Sharks for his 22nd NHL season. Despite his advanced age, Thornton has remained a productive player for the Sharks, he had 51 points in 73 games last season. At this point in his career 50 points is probably his ceiling, but he can certainly still produce enough to be considered in fantasy.

Joe Thornton potted a pair of goals, as well as provided an assist on Logan Couture's game-tying goal late in the third period of Game Three Wednesday night.

The 22-year veteran still has some pop left in him as he was able to produce three points in a critical Game Three match-up with the St. Louis Blues Wednesday night. Thornton now has 10 points, along with a minus-four rating in 16 games played this post-season. He will look to help his team take a commanding 3-1 series lead this Friday night with a Game Four victory in St. Louis.

Joe Thornton scored a goal with 52 seconds remaining in the first period that would tie the game 3-3. The Golden Knights would then proceed to score two unanswered goals to secure a Game Two win.

Thornton notched just his 28th career post-season goal for the San Jose Sharks Friday. In what could likely be his final season in the NHL, he would like to end it with a bang by capturing a championship that has eluded him for 21 seasons.