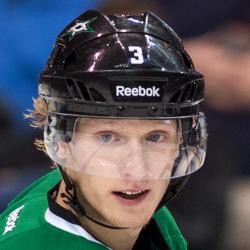 This was Klingberg's first game back since the outdoor game against the Predators on New Year's Day. He was dealing with a lower body injury, but he did not appear to miss much of a beat as he has now extended his point streak to four games.

John Klingberg will travel with the team as they prepare to take on the Los Angeles Kings this Wednesday night.

Even though Klingberg did not participate in Monday's practice, the Stars are hopeful that he will be present in Tuesday's session. At this point in time, he is considered day-to-day until further notice.

John Klingberg will not suit up for Friday's contest against the Detroit Red Wings after sustaining a lower body injury in Wednesday's Winter Classic showdown.

Klingberg is currently listed as day-to-day so the Stars and their medical staff will have to closely monitor his status in the days ahead.

John Klingberg dished out assists on both Mattias Janmark's and Alexander Radulov's power play goals as the Stars defeated the Predators 4-2 Wednesday afternoon in the Winter Classic.

Klingberg is currently on a three-game point streak along with a plus-two rating in that span. He will look to keep up the recent surge with another good performance on Friday against the lowly Red Wings.

John Klingberg joined in with the secondary assist on Roope Hintz's eventual game-winning goal in the third period of play Sunday against the Coyotes.

In 33 games this season, Klingberg owns a minus-10 rating along with two goals and 16 points.