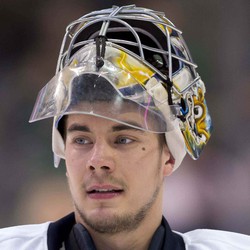 Saros stopped 19 of 24 shots in the Predators 5-4 loss to the Senators on Thursday.

Saros now holds a 5-7-3 record with a .894 SV% and 3.09 GAA. Not great. Just when it seems like the team is turning it around, they give up five goals and lose to cellar dweller Ottawa. Between splitting starts and inconsistent play, it's hard to be comfortable with any Nashville tender in season long leagues.

Saros was excellent on Monday night stopping 39 of 41 shots for a 5-2 win. This was win number five on the season for Saros.

The Predators are 3-2 in their last five and 5-3-2 in their last 10. They are still a middling team, though there are some signs of a positive turnaround. Until those positive signs are much more obvious, it's hard to confidently start any Nashville netminder.

Saros picked up the 3-1 win against the Sharks. He was pitching a shutout until Timo Meier was able to crack him with 1:58 remaining in the game

Saros and Rinne have basically been splitting starts up to this point and have very similar stats. That being said, at 4-6-2 with a 2.96 GAA and .896 SV%, Saros is not someone who should be in play, except for in great matchups, until the team starts to turn it around.

Saros stopped 25 of 28 shots in the 3-0 defeat by the Florida Panthers on Saturday.

The backup goalie's record is 3-6-0-2 and although he has played well in some starts, he does not appear to be the solution to the Predators' problems.