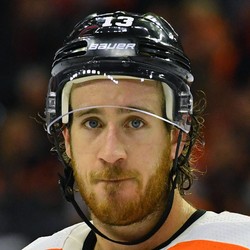 Kevin Hayes capped off a comeback from a 3-1 deficit with his game winner in the last minute of overtime Thursday night.

This was Hayes’s 18th goal of the season. Travis Konecny, Claude Giroux, and Nicolas Aube-Kubel also scored for the Flyers who hold sole possession of third place in the Metropolitan division.

The Winnipeg Jets have decided to trade away Kevin Hayes to the Philadelphia Flyers in exchange for a 2019 fifth-round pick.

During 71 games played this year, Kevin Hayes recorded a career-high 55 total points with the New York Rangers and Winnipeg Jets. It will be interesting to see how Hayes produces as he will be reunited with head coach Alain Vigneault once again in Philadelphia.

Kevin Hayes scored his first career post-season goal with the Winnipeg Jets during Sunday's 6-3 win versus the Blues.

Matthew Catalano1 year ago
Kevin Hayes finishes off the Hawks

Kevin Hayes scored the game-winning-goal in overtime to lift the Jets to a 4-3 win against the Blackhawks on Monday. In 11:34 of ice-time Hayes had one goal on three SOG.

Kevin Hayes the former Chicago Blackhawks first round pick helps eliminate any playoff hopes they may have had. He registered his first point in three games. He now has 19 goals and 35 assists on the season. Since joining the Jets at the trade deadline he has seen his ice-time drop.

Kevin Hayes scored the opening goal in the Jets 3-2 win over the Kings on Monday. In 17:28 of ice-time, he was a plus one with one goal on one SOG.

Hayes has not been fantasy relevant since his trade to the Jets at the deadline. In ten games since the trade he has only registered a point in three of them. Two of them were multi-point efforts but still his inconsistency is hard to roster.

Douglas Roth1 year ago
Do Not Sell
Are you looking to contact Customer Support about a subscription or account related question?
Yes
No, I'm a California resident looking for the California Consumer Privacy Act form