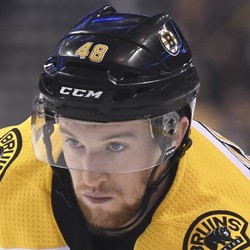 After not playing since May 29, Grzelcyk finally returned to the starting lineup Wednesday night for a decisive Game 7 against St. Louis. He contributed with his fourth goal of the playoffs, but it was too little too late. The Bruins were already down 4-0 with almost two minutes remaining in the game. Boston would fall 4-1 as the Blues captured their first ever Stanley Cup Championship in franchise history.

Matt Grzelcyk is a game-time decision for Thursday's showdown against the Blues.

Bruins defenseman Matt Grzelcyk has officially been ruled out in Game 3 of the Stanley Cup Finals at St. Louis Saturday.

After sustaining a hard hit by Oskar Sundqvist in Game 2 Wednesday, Grzelcyk will need some time to recover before returning to action on the ice. Fellow teammate John Moore will fill in while Grzelcyk sits out.

Matthew Catalano34 weeks ago
Matt Grzelcyk will not travel with team to St. Louis

Matt Grzelcyk will not travel with the Bruins to St. Louis after sustaining what appears to be a head injury following a hit by Oskar Sundqvist during Game 2 Wednesday night.

It is unknown how much time Grzelcyk will miss for the Bruins as this series shifts over to St. Louis for the next two games. He currently has a minus-two rating and seven points, through 19 games played this post-season.

Matt Grzelcyk buried a slap shot in the first period of Thursday night's tilt against Vancouver for his first goal of the season.

Grzelcyk has seven points on the season now from a goal and six assists through 13 games. To date, Grzelcyk is an even player and is averaging less than a hit a game. He's an offensive upside, rotational defenseman for fantasy owners at this time.