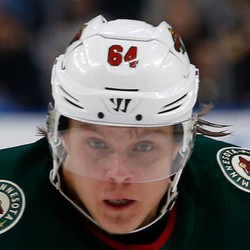 Granlund assisted Mattias Eckholm in the first period of the 4-2 victory on Saturday.

The center is heating up with five points in five games but the Preds need to prove their slump is over before he can be recommended for fantasy.

Granlund helped Calle Jarnkrok on the power play in the second period and Matt Duchene in the third period of the 6-3 loss to Vancouver.

With eight points in 21 games (-3), Granlund is not a factor for fantasy players.

Granlund's third period goal tied the game at 2-2, with the Preds losing 5-3 to Vancouver.

Although the Preds adjusted their lines so that Granlund played TW on the top line, he is not of interest in fantasy with only five points in 18 games (-1).

Mikael Granlund potted his first career playoff goal in a Predators uniform as he scored the game-winner in Game Three versus Dallas.

Granlund was dubbed the Game Three hero as the Nashville Predators escaped Dallas with a 3-2 victory Monday night. This was Granlund's first point produced in the playoffs for his new team. He will look to become a bigger contributor as this series progresses.

Granlund scored Minnesota's lone goal in their loss to the Islanders.

The goal came on a second period power play and tied the game at one. The offense couldn't muster anything up in this one as the Wild stayed cold. It was Granlund's 13th goal of the season.