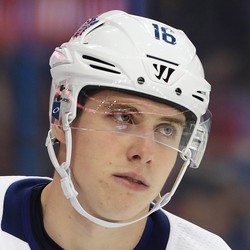 Mitchell Marner scored a goal during a 5-2 loss to San Jose. He had two shots on goal in 21:30 minutes of ice time.

The goal was his 16th of the season and he also has 49 assists with a plus-six rating in 56 games played. Marner does have one goal and three assists in his last four games.

An MRI on Sunday revealed that Mitch Marner sustained a high ankle sprain and will be out of action for at least four weeks. The winger was seen on Tuesday with a walking boot on his right leg.

Marner made comments on his injury at Maple Leafs practice on Tuesday, stating that “when I fell, I felt a snap in my ankle. I was kind of expecting when I looked back for my ankle to kind of be facing the wrong direction.” Given that description, it certainly appears fortunate that the injury wasn't worse, but this is still a big loss for the Maple Leafs and fantasy owners alike. Marner was cruising prior to going down, averaging a point-per-game through 18 contests (four goals, 14 assists) and averaging the second-most ice-time among Toronto forwards (19:40). Kasperi Kapanen was seen skating in Marner's place in practice and Nic Petan was recalled from the AHL Marlies to fill out the active roster.

Mitch Marner contributed two assists to the Maple Leafs 4-1 win over the Sharks on Friday. He added two shots and one block with a +3 rating.

Suprise, surprise. Mitch Marner is setting up goals. The Maple Leafs star playmaker is up to 14 points in 12 games this season, 11 of which have came by way of the helper. He's now fourth in the NHL in assists and is alone atop the Leafs skaters in points. Keep him rolling.

Mitch Marner contributed two assists, including one on the overtime game-winner, in the Maple Leafs 4-3 OT win over the Bruins on Saturday. He put three shots on goal and had two hits in 21:08.

After getting held off the scoresheet in Washington earlier this week, Marner bounced back with his third multi-point game of the season. He has yet to go back-to-back games without a point this season and is now up to a very solid 11 points (three goals, eight assists) through nine games, which has him in a tie with Morgan Rielly for the team lead.

Mitch Marner scored his third goal of the season and added two assists in the Maple Leafs 4-2 victory over the Wild. The goal and one of the assists came with the man-advantage. He chipped in three shots, a hit and a block.

Marner is now up to three goals and six assists in seven games and is tied for the team lead in points (9) with Morgan Rielly. Six of Marner's points this season have came on the power-play and when you consider the Leafs have seven goals with the extra man this season, Marner is the clear heartbeat of the team's effectiveness on the PP.

Brendan Ballantyne39 weeks ago
Do Not Sell
Are you looking to contact Customer Support about a subscription or account related question?
Yes
No, I'm a California resident looking for the California Consumer Privacy Act form