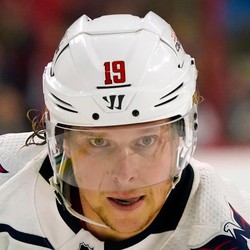 Backstrom's goal came in the first period of the 5-2 win on Saturday.

The center is a reliable source of points for his fantasy owners at 54 in 60 games (-1).

Rose Ingberman3 weeks ago
Nicklas Backstrom with helper on Thursday

Backstrom assisted Alex Ovechkin tie the game at 4-4 in the third period, with the Caps losing 6-5 in overtime to the NY Rangers.

Backstrom helped Alex Ovechkin on the power play for the Caps first goal in the 4-3 win over Minnesota.

The center is a steady producer for his team and his fantasy owners at 51 points in 57 games (-1).

Backstrom helped Tom Wilson and Carl Hagelin in the third period of Washington's 5-3 victory over Pittsburgh.

A steady producer for both his team and his fantasy owners, the center has 50 points in 54 games (+1) and is on a three-game streak.

Backstrom helped Tom WIlson on the power play in the second period as the Caps lost 3-2 on Saturday.

With 48 points in 53 games (-2), the center is a steady source of production for fantasy.