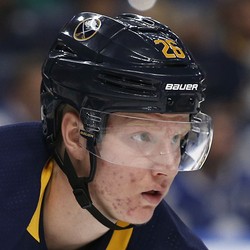 Rasmus Dahlin recored his fourth assist, fifth point overall on the season on Monday. Dahlin is also a +4 on the year.

Dahlin is off to a great start for the Sabres, and the future is bright for the young star. He should remain a top offensive defenseman for years to come.

Rasmus Dahlin scored his 4th goal of the season on a first period power play in the Sabres 3-0 win over Anaheim on Saturday night.

Rasmus Dahlin has been everything that he was expected to be as the first overall pick and possibly more at this point. Rasmus Dahlin has integrated himself nicely into the Sabres offense and first power play unit. Dahlin has 4 goals and 16 assists in 37 games this season. Dahlin should keep getting better as the season wears on. Dahlin is a must own in all fantasy formats especially dynasty/keeper leagues.

Rasmuses are wild! Take your pick of Rasmus Dahlin and Ristolainen and you are sure to come out ahead with either or both. Dahlin has put together a season that validates his first overall pick status and he keeps getting better. Dahlin has 3 goals and 16 assists in 34 games. Dahlin is a must own and start in all fantasy formats especially keeper/dynasty leagues.

Rasmus Dahlin put up a goal and two assists in the Sabres 4-3 OT loss to the Capitals on Saturday night. Dahlin started off his scoring with an assist on Jack Eichel’s first period goal. Dahlin followed that up with another assist on a Jack Eichel power play goal in the second period. Dahlin finished off his productive evening with a power play goal of his own in the second period.

Rasmus Dahlin is a can’t miss prospect but even top prospects go through dry spells. Going into Saturday’s game Dahlin was scoreless in his last 7 games. Dahlin emphatically made it be known that he is for real with a 1 goal and 2 assist game against the Capitals. Dahlin now has 3 goals and 14 assists through 33 games. Dahlin will have peaks and valleys as he adjusts to the NHL game and lifestyle but he will put up solid numbers when it’s all said and done. Dahlin is a must own in most fantasy formats especially dynasty/keeper leagues.

Rasmus Dahlin has scored in his last 3 games. It appears that the first overall pick from last season has hit his stride. Dahlin is on the second defensive pairing and the first power play unit so the production should keep coming. Dahlin has 2 goals and 11 assists in 24 games. If Dahlin is available in your league pick him up now. It may be your last chance.