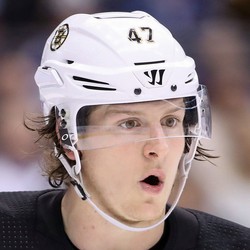 Torey Krug had an assist helping Boston to a 2-1 overtime win versus Edmonton.

This season in 53 games, Krug has eight goals and 32 assists with a plus-four rating. He has one goal and one assist in his last five games.

Torey Krug scored the winning goal in overtime and recorded two assists in Boston's 5-4 victory over Minnesota on Saturday night.

Krug had been on IR, missing five games with an upper-body injury. He's now up to two goals and 13 points in 17 appearances this season and should be activated in all formats.

Krug had previously been ruled out for playing at all this weekend due to an upper body injury he suffered last Sunday against the flyers. Paul Carey has been recalled from AHL Providence ahead of tonight's game vs. the Capitals. Stash Krug on IR until more is known about the severity of his injury.

Torey Krug was forced out of Sunday night's shootout loss to the Flyers with an upper body injury. Urho Vaakanainen has been called up from AHL Providence on an emergency basis, which portends that the injury will keep Krug out of action for a bit.

Krug and teammate Charlie McAvoy are two of the Bruins' must-own defenseman from a fantasy standpoint. He has 11 points in his last 12 games, and ranked third among NHL defensemen in power-play points in 2018-19.

Torey Krug chipped in a goal and a power play assist as the Bruins topped the Vegas Golden Knights 4-3 Tuesday.

Krug ranked third among all NHL defensemen last season in both power play points and assists. He and teammate Charlie McAvoy are the only two must-start Boston defensemen.