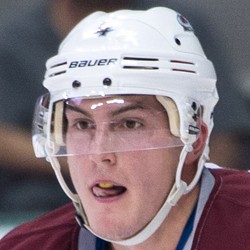 The defenceman has looked rejuvenated since Sheldon Keefe was named head coach and Barrie has not left the goal column since the beginning of his tenure behind the bench. Barrie is the first defenceman in Maple Leafs history to score in three straight road games that were played consecutively. He looks like a completely different player and is now a must-start in fantasy lineups. His season totals have crept up to 12 points (three goals, nine assists) in 26 games after producing a weak five assists through the first 21 games.

Tyson Barrie scored his first goal of the season in the Maple Leafs' 3-1 win over Arizona on Thursday. He added two shots, four hits, and one block in 20:12 of ice-time.

It had been a long time coming for the smooth-skating defenceman, but he finally broke through with a goal. After the firing of Mike Babcock, many speculated that the player that would benefit most from the change was Barrie, given his putrid start to the season (seven points, all assists, in 23 games). Early returns certainly suggest that could be the case. Barrie was receiving ice-time paired with Morgan Rielly and also playing on Toronto's first power-play unit...it's about time. With a new head coach more geared toward Barrie's wide-open, offensive brand of hockey, fantasy owners can breathe a deep sigh of relief that we could soon be seeing the Tyson Barrie of old.

Tyson Barrie was held without a point for the tenth straight game on Saturday night as the Maple Leafs dropped their contest in Montreal, 5-2. He had four shots, one hit, one block and a -2 rating in 24:37 of ice time.

To say Barrie is struggling would be a huge understatement. You'd have to go all the way back to 2013 to find a pointless streak in his career that matches the one he's in the midst of right now. The expectations were high and his start was hot (four points in first three games) but he's been silent and a -9 since. That being said, it's still too early to panic. He and the Leafs are too talented for this to continue much longer.

According to reports from Leafs training camp, Tyson Barrie expects to play on the second power-play unit in 2019-20, with Morgan Rielly continuing to lead the top unit.

This is certainly a situation worth monitoring as Maple Leafs training camp progresses, as these comments suggest there will be little change to the Maple Leafs top unit despite adding the former Avalanche power-play quarterback this offseason. Barrie has said he expects to take over for Jake Gardiner, whose PP2 role was vacated due to his departure in free agency. Whatever shakes out, the new member of the lethal Maple Leafs attack certainly appears in line to top the career-high 59 points he posted a season ago.

Tyson Barrie got the Avs on the board in Thursday night's playoff-clinching OT victory over the visiting Winnipeg Jets. He finished the game with one point, three shots and two blocks.

Barrie showed up once again in a pivotal victory for Colorado. He completely sniped a top-shelfer on the short side, over Connor Hellebyuck's shoulder to get the Avs on the board right when they needed one. With the victory, Colorado clinches the final playoff berth over the Arizona Coyotes and will see the post season for the second straight year. There is still one game remaining but Barrie is up to 14 goals and a career-high 59 points this season. He is a big reason the Avalanche have been coming down the final stretch hot.