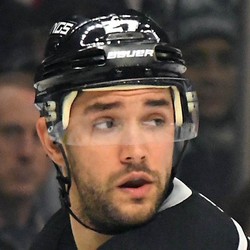 Alec Martinez had three shots on goal in 21:12 minutes but failed to register a point during a 4-1 Vegas loss to his former team the Los Angeles Kings. Martinez played his first 10 seasons with Los Angeles and was acquired in a trade from the Kings on Feb. 19.

This season in 47 games, Martinez has three goals and 11 assists with a minus-four rating.