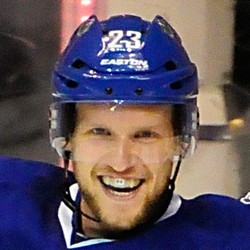 One of his assists came on the powerplay, and the other was an impressive stretch pass that ended with a Sven Baertschi goal. He finished the night with two shots on goal, two hits and four blocked shots.

His second two point game in his last two games puts him at four points on the young season. His average time on ice is sitting at 25 minutes per game. His spot on the top powerplay unit along with his category coverage makes him a solid add as a fourth defender.