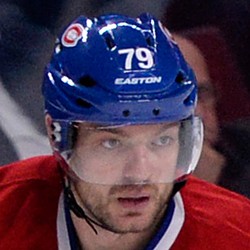 Andrei Markov is looking to return to the NHL

According to Andrei Markov's agent Allan Walsh, he believes there's a very good chance that the 40-year old defenseman will play for an NHL team in the 2019-20 season.

Markov hasn't played in the NHL since 2017, but he has intentions of returning at the age of 40. Multiple teams have reached out expressing interest in the veteran defenseman. His agent is confident that Markov will be on a team at some point prior to when the season kicks off in early October.