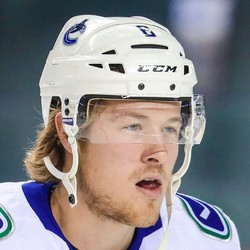 Restricted free-agent Brock Boeser and the Vancouver Canucks have agreed to a bridge deal that will pay the right-winger $17.625 million over the next three years.

At just 22 years of age, Boeser has established himself as a real threat to put the puck in the net. In his rookie season in 2017-18, he burst onto the scene with 29 goals and 55 points. In 2018-19, he proved that production was no fluke by posting 26 goals and 56 points while firing 209 shots on net. A pretty solid showing considering how weak the Canucks have been, but when you consider he's only managed to play 62 and 69 games in his first two seasons, it's hard not to wonder how much more impressive those totals could've been. You certainly hope Boeser can stay healthy going forward, because with budding superstar Elias Pettersson set to center his line once again, an electric fantasy combo could be emerging.