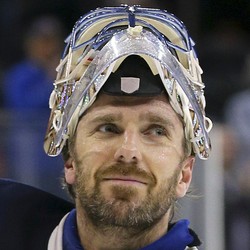 Henrik Lundqvist chased from net in loss to Stars

Henrik Lundqvist allowed four goals on 15 shots faced and was pulled after the second period as the Rangers would lose to the Dallas Stars 5-3 Monday.

After coming off a stellar performance on Saturday where he shutout the Detroit Red Wings with 33 saves, Lundqvist struggled mightily in Monday's loss to the Stars. He was visibly dejected during the post-game interview as he knows he has had better moments than that in net. The end of the road is drawing near for the king and it may be time to hang it up soon. He now has a 10-11-3 record with a 3.13 GAA and 0.907 SV% on the year.