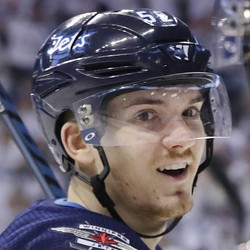 Jack Roslovic scored twice in the Jets 4-3 overtime win against the Blackhawks on Monday. He was a plus two with two goals on five SOG in 10:56 of ice-time.

Roslovic continued the recent trend in which the big guns are shooting blanks but the bottom six forwards are carrying them. Roslovic now has 9 goals and 15 assists thru 74 games.