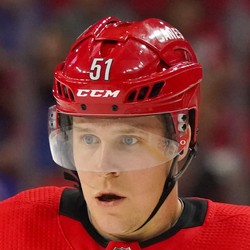 Jake Gardiner has signed a four-year deal with the Hurricanes, with an average annual value of $4.05 million.

Jake Gardiner was a reliable offensive option from the back-end during his tenure with the Leafs. He had a bit of drop in production last season, 30 points in 62 games, but managed an impressive 52 points in 2017-18. Gardiner should have an opportunity to contribute on the power play this season.