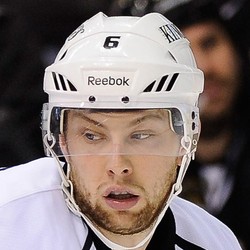 Jake Muzzin will not play in Saturday's game

Jake Muzzin will reportedly miss Toronto's contest on the road against the Flyers on Saturday due to "personal" reasons.

This is a blow for the Leafs, but given that it's not being designated as an injury, Toronto shouldn't be without one of their top defensemen for long. This report is a tad peculiar though, as reports surfaced on Thursday that Muzzin had a "charley horse" and on Friday he skated in a red "injured players" sweater. So there seems to be some confusion. In any case, Muzzin is confirmed out against the Flyers. We'll have to take the Leafs at their word that it isn't due to health reasons. Muzzin has nine points (three goals, six assists) across 14 games.