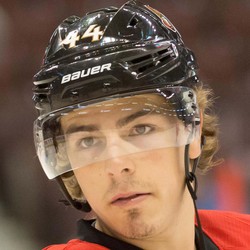 Jean-Gabriel Pageau scored his 15th goal of the season in Ottawa's 5-2 loss to Vancouver on Tuesday night. He added four shots, three hits and one block in the game.

After a break-out November that saw him put up the third-most goals in the league (11) behind just Connor McDavid and David Pastrnak, Pageau continued to light the lamp in his first game in December. Pageau has unexpectedly risen to fantasy prominence with 21 points (15 goals, six assists) in 28 games so far this season. His contributions of 67 shots, 44 hits and 23 blocks make him a well-rounded piece to for fantasy owners to fill out their lineups.