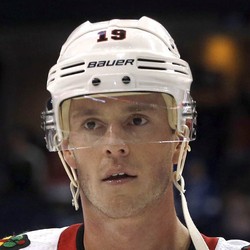 Jonathan Toews scored a goal in the Blackhawks’ 4-3 win over the Oilers on Thursday. He had one goal on four SOG in 19:47 of ice-time. Toews now has 18 goals and 39 assists in 67 games played this season.

Toews has been playing great lately even if it is not showing up on the score sheet. He has been one of the best captains in the league over the last decade and it shows still. His skill may have diminished but his will to win has not.