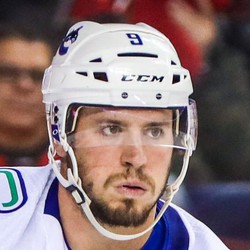 J.T. Miller scored a goal and had an assist during Vancouver's 4-3 overtime win versus the New York Islanders. He also had three shots and two hits with a plus-two rating in 18:22 minutes of ice time.

The goal was his 20th of the season. Miller is riding a five-game point streak that includes four goals and three assists.