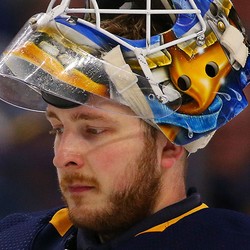 Linus Ullmark gets the win on Tuesday against the Blues

Linus Ullmark stopped 28 on the 30 shots he faced for his ninth win on the season. He currently has a 2.83 GAA.

Ullmark has won four of his last five starts and when in net is playing well for the Sabres. He is worth starting when he is in between the pipes, especially in two goalie leagues.