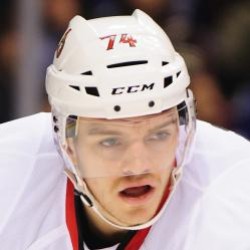 Mark Borowiecki chipped in his most useful stat-line of the year in Ottawa's 5-2 loss to Boston on Saturday. The gritty defenseman picked up a couple of assists while also chipping in six penalty minutes, three hits, two shots and a block. He recorded a +2 rating in 15:10 on the ice.

Borowiecki is certainly not known for his offensive touch, but when you mix in some points with his always reliable hits and PIMs (sixth and seventh in the league, respectively), it can turn into a solid fantasy night. He has hit a bit of a hot streak with a goal and three assists in his last four games, but don't expect that to continue. Borowiecki has collected five points total in 12 games this season and is not a fantasy consideration outside of the deepest of banger leagues.