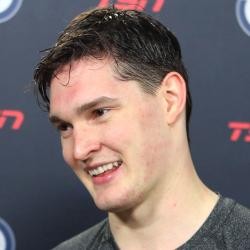 Hutchinson in net for franchise-historic night

Michael Hutchinson was the winning goalie on Monday night, backstopping the Avalanche to a 2-1 victory over the Detroit Red Wings. He stopped 17 of 18 shots.

Hutch didn't have an overly busy evening while seeing sub-20 SOG but he made the saves when he had to and included a nice pad-save on a break away by Anthony Mantha. He got the win for his new team while newly-signed Pavel Francouz got the night off. The Avalanche set a franchise record for eight straight road wins. This was Hutchinson's first call to action since being acquired and is now 1-0 with a .944 save percentage and 1.00 GAA since joining the Avs.