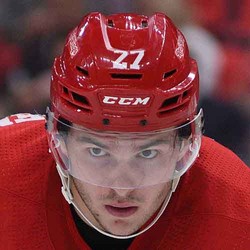 Michael Rasmussen had a two point night in the Red Wings 5-4 loss to the Lightning on Thursday. He was a plus two with one goal, one assist and three SOG in 12:12 of ice-time

Anyone who drafted Rasmussen as a sleeper cut him long ago. He will be a deep sleeper again next season but his eight goals and nine assists thru 59 games shows he is still a ways away from being fantasy relevant. The 2020-2021 season looks more realistic for the breakout.