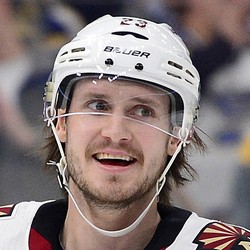 Oliver Ekman-Larsson scored his third goal of the season as the Coyotes defeated the Sharks 3-2.