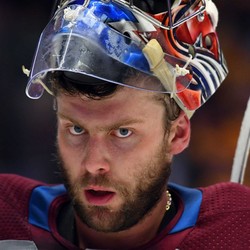 Semyon Varlamov did not have his best game as he allowed four goals on 34 shots in the Islanders 4-5 shootout loss to the Vancouver Canucks on Tuesday night.

Semyon Varlamov has really taken a step back in his play as of late. He has allowed multiple goals in each of his last five games and has not recorded a win since February 23rd. Varlamov has played well for most of the season, so start him if you must. But, fantasy owners may want to look for a better option going forward.