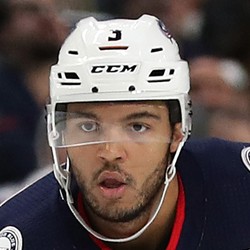 Seth Jones was held off the scoresheet on Monday during a 3-0 loss to Boston. The defeat ends the season for Jones and the Blue Jackets. He finishes the playoffs with three goals and six assists in 10 games played.

It was obviously a disappointing end to the year after Columbus swept the President’s Trophy-winning Tampa Bay Lightning in the first round of the playoffs. Despite the loss, the 24-years-old Jones still has an incredibly bright future in the NHL. Look for him to continue to shine next season even if the Blue Jackets regress as a team with the possible departures of goalie Sergei Bobrovsky and forward Artemi Panarin via free agency this summer.