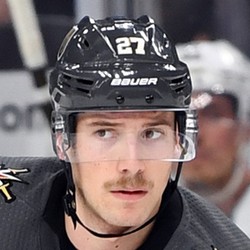 Shea Theodore scored a goal and had five shots on net during a 4-1 loss to Los Angeles. His goal came on the power play at 13:14 into the third period, but was the only offense the Golden Knights could find after firing 43 shots on goal.

He now has 11 goals and 33 assists with a plus-11 rating in 67 games played. The goal was his first on the power play this season and he now has a total of 16 points with the man advantage.