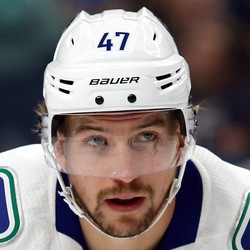 After starting the season with no points in two games, Baertschi chipped in two goals and an assist Tuesday night.

His first goal was a beauty, showing Baertschi's finishing ability. Even after the big night, he doesn't warrant much consideration outside of deep leagues. He was on a 44-point pace last season before his separated shoulder in March. As long as Sven is shooting at such a low rate, his upside will remain limited.