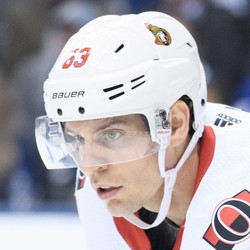 Tyler Ennis scored a power-play goal - his fourth goal of the season - in Ottawa's 2-1 win over the Philadelphia Flyers on Friday night. He had four shots on goal in the game.

Ennis now has eight points (four goals, four assists) through 19 games this season and three of his goal have came with the man-advantage. Even though Ennis is averaging a very solid 2:59 of power-play ice-time per-game this season, the Senators power-play is by far the worst in the league (6.5%), thus rendering that ice-time as somewhat irrelevant in fantasy terms. Ennis isn't creating much at 5-on-5, so he isn't a fantasy option but if Ottawa's power-play turns it around, he stands to benefit.