Will Latavius Murray play a substantial role in a budding Raiders’ offense?

Eric Moody breaks down the fantasy value of three different running backs who are entering a contract year in 2016.

Imagine you are a professional football player? Seventy thousand pairs of eyes are fixed on you while millions around the world watch you on television. You are a top performer, but have dealt with adversity like many other players. You are entering a contract year and your livelihood is on the line. Pressure raises self-awareness and anxiety about your performance. Will you execute your assignments efficiently or will you crumble under the pressure? This is the epitome of an NFL player entering a contract year season. Money talks in the NFL just like in other lines of business. The purpose of this series is to highlight notable running backs, wide receivers, quarterbacks, and tight ends who are looking to get paid in 2016. My goal is to highlight players who have the potential to finish within the top five of their position or outperform their draft position that I am aggressively targeting. The second part of this series will focus on running backs.

Lacy’s struggles with his weight, addiction to Chinese buffets, and post P90X photos have been well documented. He set a career low last season in games started (12), rushing attempts (187), total yards (946), touchdowns (5), and offensive snaps (471). Lacy has maximized his offseason and appears ready to bounce back from a disappointing 2015 season in order to earn a career-defining contract. I anticipate him having an opportunity to recreate his 2014 fantasy points per touch of 0.80.

The biggest threat Lacy faces in the Packers backfield is James Starks. 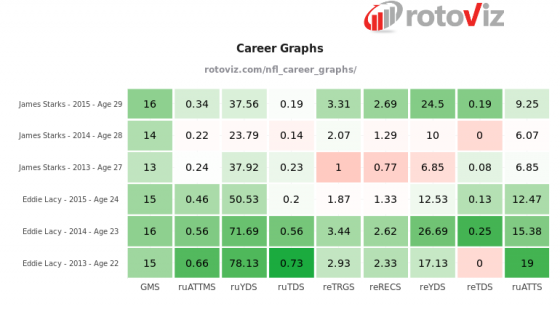 One key to Lacy’s success in 2016 is tied to the Packers explosive offense and his red zone opportunities.

The offense should get back on track with the return of Jordy Nelson and a healthy Randall Cobb. Here is a visual using data from the RotoViz NFL Drive App to display how tremendous the Packers offense has been since Lacy’s rookie season in 2013.

Lacy is currently the RB10 according to FantasyPros consensus ADP (average draft position) rankings. He is typically being drafted in the third or fourth round. Lacy has the upside to finish as a top-five fantasy running back in this offensive scheme.

The SPARQ (Nike’s measure for athleticism) phenom was one of seven running backs to exceed 1,000 rushing yards and averaged 4.0 yards per carry. Murray produced 0.53 fantasy points per touch in 2015. He played 683 snaps as part of a running back by committee. Murray owned 80% of the running back carries for the Raiders, produced nine runs of 20 yards or more, and only two games of 100 or more rushing yards. He had 34 carries in the red zone which was solid relative to the number snaps he played last season. Here is a visual of how the Raiders backfield performed in 2015. 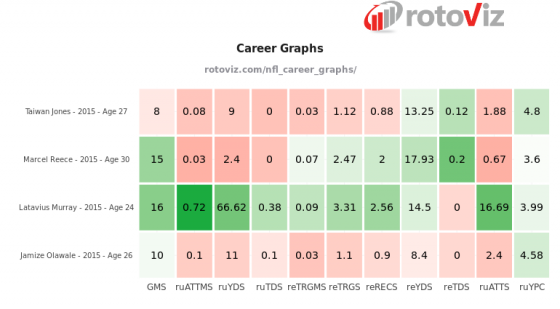 The Raiders defense also gave up points on 38.2% of their drives. This defense was also undisciplined due to the 44 first downs give to opposing teams by penalty (the 3rd most in the NFL).

Khalil Mack believes the Raiders defense can stand toe to toe with Broncos defense. He was interviewed back in May via Yahoo! Sports and shared his rationale.

The Raiders were very active this off-season in order to improve their secondary with the addition of free agent Sean Smith, Reggie Nelson, and 2016 NFL Draft pick Karl Joseph. The Raiders defensive front is also stout with Mack and Bruce Irvin. Who do you double team with so many weapons on the defensive line? An improved Raiders defense bodes well for Murray. The ability to get into some sort of rhythm will help with some of his consistency issues from last season.

The Raiders front office also drafted running back DeAndre Washington in the 2016 NFL draft to give Murray some competition. He was very proactive in his conditioning and preparing himself mentally for the starting running back role heading into last season. I see Murray again overcoming the adversity and having a very productive season in order to secure a career-defining contract. He is currently the RB17 according to FantasyPros consensus ADP (average draft position) rankings. Murray is a value pick and has the potential greatly outperform his draft position.

Riddick produced 1.45 fantasy points per touch in 2015 in PPR (points per reception) formats, had the second most catches (80), and receiving yards (697) among all running backs. He was the seventh running back since the merger to exceed 600 receiving yards without producing at least 150 yards rushing according to Pro Football Reference. Riddick played the most offensive snaps of any of the Lions running backs. 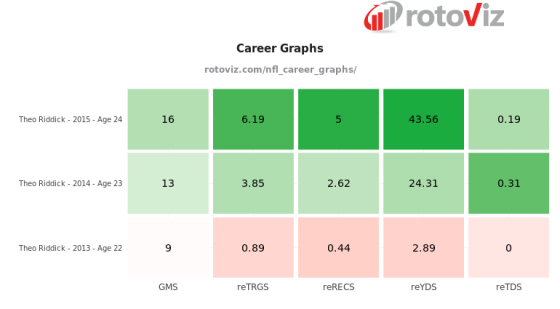 The Lions offense came to life when Jim Bob Cooter was promoted to offensive coordinator. The team won six of its last eight games and displayed a more balanced offensive attack. Riddick has a stranglehold on the receiving back role in this offense. He will be part of a committee with Ameer Abdullah, Stevan Ridley, or Zach Zenner who will handle early down and goal line carries. The Lions have averaged 166 targets to their core of running backs during Riddick’s three-year career. He is currently the RB44 according to FantasyPros consensus ADP (average draft position) rankings. I prefer to target Riddick in PPR leagues due to his defined role. Last season he touched the football or was targeted on 24.6 of his offensive snaps.

If you are a believer in targeting running backs entering a contract year this article provided context on a few you can select at different stages of your fantasy draft. Here are my personal 2016 projections for the running backs mentioned above.

What is your perspective on the running backs I mentioned? Do you feel differently? Let’s connect via Twitter to have a discussion. I encourage you to follow me at @EricNMoody.