Sabermetrics Glossary: Left on Base Percentage

Left on Base Percentage (LOB%), also known as Strand Rate, is one of the simpler advanced statistics to calculate. It is simply the number of base-runners that a pitcher leaves on base at the end of an inning divided by the total base-runners that they allow. For example, if a pitcher allows five base-runners during his outing, and only one of them scores, that works out to be an 80% strand rate. Note that base-runners are only counted when a pitcher finishes the inning. If he leaves the game mid-inning and a reliever allows his inherited base-runners to score, that does not change the original pitcher’s strand rate.

The idea behind this statistic is that there is a random element to when a pitcher allows hits. Two carbon copy singles could have completely different repercussions for the pitcher’s stats depending on when that single was allowed.

To give you an idea of what the data looks like for LOB%,  let’s look at a histogram. The LOB%’s are on the x-axis, and the frequencies are on the y-axis. The higher the bar, the more pitchers there were that fell into that range of LOB%. 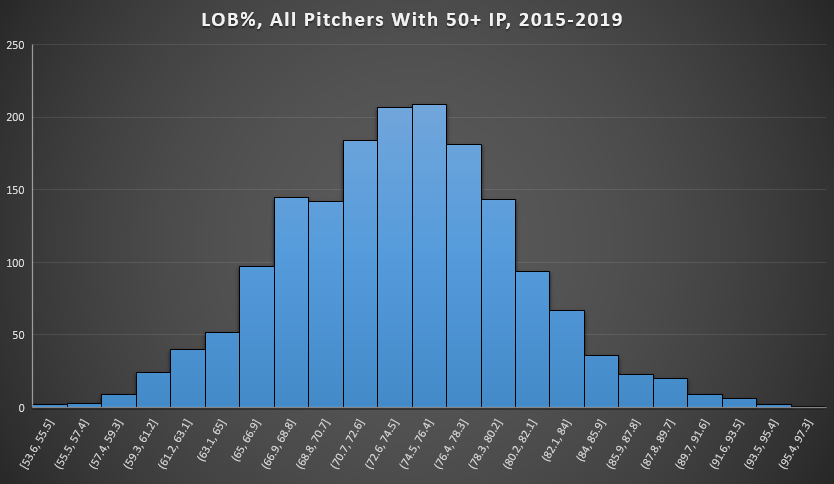 This visual represents every LOB% posted by a pitcher that threw more than 50 innings in a season from 2015-2019. The average LOB% in this data is 74%.

While there are some pitchers who are better pitching from the stretch (meaning there are runners on) than others, no pitcher exists that can consistently post strand rates outside of that range. So if you see a pitcher with a strand rate well below the league average, his ERA was probably inflated due to bad luck. The opposite is also true — too high a strand rate, too low an ERA.

Here are two examples of this:

I am not saying that strand rate accounted for all, or even most, of those changes, but it does play a significant role. With that in mind, you should keep an eye on extreme values in LOB% when evaluating players and adjust your thoughts on those players accordingly.

If you enjoyed this post and want to learn more about advanced statistics, check out our sabermetrics page.