Baseball continues to be dominated by numbers and statistics, and it has certainly impacted how people conduct a fantasy draft. Most owners rely on some sort of spreadsheet or ranking system, where a player’s value can be seen with a glance.

For almost every single position in baseball, these numbers work. And it’s because we can reasonably project playing time. Of course, there will be positional battles won and lost during Spring Training, but whichever way the news breaks will likely have a clear direction for the player in question.

This does not apply to the closer.

No matter how vehemently a manager stands by the team’s closer in Spring Training, two bad outings in April — which is a fair expectation given the nature of starting a new season — will raise questions. Questions allow the opportunity for new answers, and, ultimately, new closers.

This is where the closer position — and how we approach it — differs from the rest of the fantasy draft. For a hitter, we’d like to know we’re targeting the starter on a team, and we can safely project what said hitter would do in a half-season. For a closer, the currency is solely in the form of save opportunities. Nothing more, nothing less.

Chasing saves becomes a frustrating endeavor precisely because it differs so greatly from what we’re used to doing for the other twenty-something rounds in the draft. It’s an isolated approach forced into the group effort of forming the best team.

There is a solution to this problem, however. And more leagues are starting to implement it precisely to counter the volatility of the closer position. That is, change the statistic from saves to saves plus holds.

The logic behind this swap is straightforward. If a relief pitcher doesn’t get the save opportunities — even if deserved — then the same pitcher is almost always going to get the hold opportunities. If the two numbers are weighed equally in the standings, then we are no longer searching for one commodity. If anything, we’re searching for the commodity most important for a relief pitcher to deliver: the ability to protect the lead for another inning.

Now, we don’t care if the pitcher enters the game in the eighth or ninth inning — sometimes, the bigger “moment” isn’t in the final inning. We only care that the pitcher is delivering for both us and the Major League team. Once that’s established, we can judge relief pitchers fairly against one another using the rest of the categories needed for our particular fantasy league.

Below is a chart created using FantasyPros’ projections, sorted by saved plus holds, and with all starting pitcher-eligible players removed from the player pool: 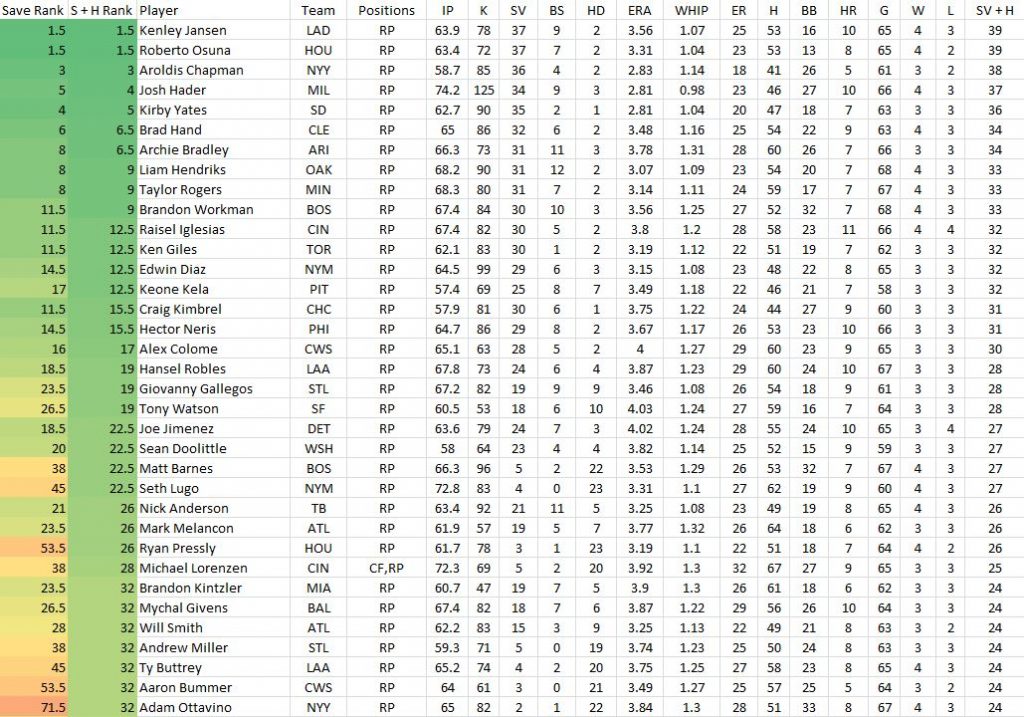 The first obvious but crucial takeaway from the chart is that the top closers remain the top options in starts plus holds leagues. It’s easy to see why. Most teams prefer to put their best bullpen piece at the end of the game. If the player thrives, then they earn the title of closer. Save opportunities arise, and the closer can solidify the role.

The latter is an important takeaway. Even if we remove the other areas in which the closer contributes — strikeouts, WHIP, ERA, etc. — the leaders in saves plus holds are almost always carried by the save totals.

At the end of the day, stability remains a finite resource. The best closers usually have it.

If stability is what drives the top relief pitchers to the front of the chart, then instability is what would normally create panic. Look at pitchers like Keone Kela or Ken Giles. By their own metrics, the two should have no problem closing out games, and they recorded saves along with the best. But there is a risk in drafting either one in a saves league. That is, what happens if Kela gets traded to the Yankees? Or if Giles goes to the Dodgers? Their value plummets, right?

Wrong. At least, wrong for anyone in a saves plus holds league.

The beauty of this format is that players retain their same value even if they join a team on which save opportunities are already claimed. In the introduction of this piece, I mentioned the volatility of the position. Sometimes, the volatility comes from external causes outside of the pitcher’s control, and trades are an example of this.

Anyone rumored to be dealt at the trade deadline will always be viewed as having a shaky role. This will likely create a discount where we can pay a lesser price for nearly the same return.

On the same topic of shaky roles, some teams openly admit that the closer position is up for grabs. This drives fantasy owners absolutely crazy. Not only are we left speculating about which player will earn the job, but we also have to consider that the manager might disagree and award it to someone else. It’s a constant scanning of the news, and it speaks to the difference in approach to closer compared to any other position.

Unless we care about saves plus holds.

San Francisco and St. Louis currently appear to be setting up for a closer-by-committee start to the season. Directly, Giovanny Gallegos and Tony Watson are too risky to draft with confidence in a saves league. Both players have value elsewhere — especially Gallegos and his 1.08 WHIP. Armed with the knowledge that we can be protected if either player gets holds instead of saves, we can draft them for their actual talent, and not the role that may remain unfilled.

Adam Ottavino (NYY)
If we’re judging relief pitchers solely on their ability to get outs, then Adam Ottavino needs to be in the discussion as one of the best in the game. But, because of the pecking order in the Yankees’ bullpen, Ottavino is unlikely to see any save chances. It’s a waste to have him on a fantasy team. Unless, of course, we combine saves plus holds.

Despite his talents, Ottavino has never pitched a full season as a team’s closer, but he has recorded at least 20 holds in four different seasons. Most notably, he appeared in more than 70 games for the Yankees last year, and he owned a 1.90 ERA for the season.

Seth Lugo (NYM)
Seth Lugo is probably best known for his elite spin rate — he has ranked in the top-three for average spin rate on curveballs in each of the last three years — yet he likely won’t supplant Edwin Diaz as the closer for the New York Mets. Still, the Mets trust Lugo in key situations, and he has rewarded them with back-to-back campaigns with an ERA under 3.00.

What’s most eye-opening about Lugo is that he actually appears to be getting better. He increased his strikeout rate and lowered his walk rate from 2018 to 2019, while also lowering his FIP. The only piece of the puzzle that had been missing for Lugo as a fantasy asset was his lack of save opportunities. If we add holds into the mix, he immediately becomes one of the better relief pitchers worth owning.

The spike in strikeout rate is the most important feature for Lorenzen, largely because he previously held a high number in this category. It dipped dramatically in 2018, but this now seems like an outlier.

If Lorenzen can simply maintain his production, then he’s another excellent source of holds that could also steal a few saves every so often.

Ryan Pressly (HOU)
I wrote about Seth Lugo finishing in the top-three for average curveball spin rate, but the actual leader in this category for 2018 and 2019 — and a second-place finish in 2017 — was Ryan Pressly. How did it work out for him? A league-leading 31 holds in 2019 and flat-out excellent numbers across the board.

Pressly is one of the premier relief pitchers in the game and moves firmly onto the list of key targets if counting holds plus saves. Every one of his statistics is impressive, and there is no reason to doubt him going into 2002. If your league includes holds — be it in the form of a standalone number or combined with saves — then Pressly needs to be considered on draft day.