It is getting harder and harder to find stolen bases in fantasy baseball in these days of the long ball. Despite the shift away from manufacturing runs, the steals category is not going anywhere in the fantasy game.

One claim that is thrown around a lot is that stolen base totals are correlated with where a hitter lines up in the batting order. A move to the lead off spot is usually met with a rise in the steals expectation, and vice versa. Since every single event in a baseball game is recorded, we can actually go into the data and figure out whether or not this is true. I did just that and I’m here to share my findings.

For this post, I looked at the last six seasons (2014-2019) and identified hitters that had at least 50 games started in the lead off spot, as well as at least 50 starts in other lineup spots. I then compared their stolen base rates between these games to see if they stole bases at a higher rate in games when they hit lead off.

First, I just compared the lead off spot to every other lineup spot taken together. For example, Dee Gordon has hit lead off in 720 games, and has hit elsewhere in 172 games. In his 720 games as a lead off hitter, he has stolen bases at a pace that would steal 58 bases over a full season. In the 172 other games, he stole bases at just a 38 per year pace. Note that the extra plate appearances you get being a lead off hitter do not factor in here since I am just extrapolating stolen bases on a per plate appearance basis.

That is a pretty distinct difference for Gordon there. Here are the top ten in the study, guys that run much more often when batting lead-off. 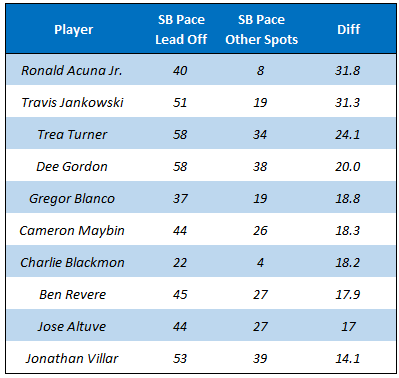 Despite the huge differences you see there in the top ten, the average difference is just 2.4 steals over a full season. However, if we take out the guys that aren’t considered “base stealers” (I did this by filtering out any hitter who did not have a 15 or more steal pace in either situation), that comes up to 4.2 steals.

Next I decided to run it again, but this time I excluded the #7-#9 lineup spots. I did this because hitters in the bottom third of a lineup are not typically players we are interested in for fantasy. Also, this overarching question is typically about guys like Mookie Betts, Trea Turner, or Ronald Acuna – guys that aren’t going from #1 down to the #7, they are going to a power spot in the heart of the order. Here are the top 10 in this new situation: 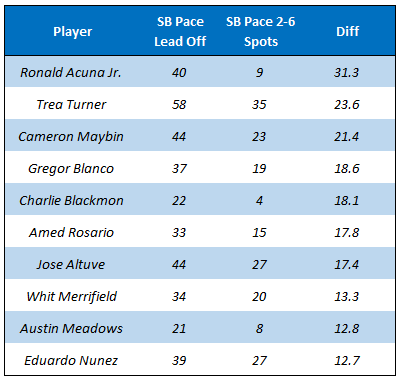 The average difference here is 1.3 steals over a full season, so on average a player really does not lose steals when going from the #1 spot to a power spot in the lineup. When we filter out the guys that don’t run frequently in any situation, the average jumps up to 2.3.

This is to say that you should not significantly downgrade a steals projection when a hitter switches from being a lead-off hitter to hitting somewhere in the 2-6 spot in the order. The opposite is also true, just because a #3 hitter bumps up to the #1 spot, you should not automatically assume you’ll get more steals. This, of course, can be done at an individual player basis and that would be better information to make fantasy decisions with, but at a high level the difference is less stark than what you may have suspected.

Mookie Betts is a good example of this, as Andrew Benintendi played a lot of games in the lead off spot last year and Betts saw his steals drop substantially. Now that he is leading off for the Dodgers, some people may think the steals are going to come back. The numbers for Betts say not so fast, as he actually stole bases at a slower pace with the Red Sox when hitting #2-#6 as compared to leading off (he had a pace of 23 steals in the lead off spot and 27 elsewhere).

The real steals gains seem to come when a player jumps from the bottom of the order to the very top. This can probably be largely explained by just an increase in overall performance. Say a player just isn’t much of a hitter for the first few years of his career and doesn’t get on base much. One year, he turns it on and starts getting on base a lot more, earning himself a promotion to the top of the lineup. If the steals come up in that case, it would probably be more attributable to the increase on-base percentage and not the lineup position.

The conclusion here is to take an individual player look when you’re thinking about an individual player. There are guys like Acuna that clearly run more when leading off, but there are also lots of players that run with the same or less frequency if they are elsewhere in the lineup. In general terms, speedy players do steal more bases when they lead off versus other lineup positions, but on average it’s a very small gain – just a few steals over the course of a whole season.